The fall is one of my favorite times of year. (Pumpkin Spice! Sweaters! Costume Season! My Birthday!) And not least of all because it’s time for Football!

I’ve written about my complicated relationship with my family’s chosen favorite sport a time or two, and being a football fan these days is something that comes with a heavy load of, “my fave is problematic” rationalization.

I’m not going to deal with that right now. Because I’m too busy heading out to South Bend, Indiana for the first time to go to the Mecca of football fans, Notre Dame!

Two of my cousins are currently attending the University and The Irish happen to be taking on Georgia Tech this weekend, where four of my cousins (and one of their spouses) graduated from.

This is after spending last weekend at Fordham seeing my cousin play in a game against Villanova and at Yankee Stadium seeing them play the Toronto Blue Jays. (Baseball, also being a sportsball, it counts) THEN I went home and watched the Men’s Final of the US Open.

What I’m saying is that sometimes it’s nice to leave my superhero hat at home and cheer on talented people who run really fast at each other, and I wanted to celebrate that.

I can be more than one thing is something that I often have to remind even myself, and these weekends are a case of that.

So remember kind reader, that you too can be more than one thing! Go forth and do that.

I’ve talked before about football and how much I love it and how much it’s meant to me. And I’m really excited for the season to start for a lot of reasons. I’m psyched that I can hang out and watch games again, now not having to work on Sundays or Monday nights. (Might actually get to a couple of games instead of just the 1 I got to last seasons.)

But one of the greatest things about football season coming back means that The League is back.

If you haven’t watched The League, I must assume that you either don’t like football or you don’t like things that are awesome or funny and I guess your life is probably pretty sad.

But, to get you up to speed, The League is about a group of friends and their fantasy football league. The show is “semi scripted” (You know, like Curb!) and always pretty raunchy and like most of FX’s original programming, deeply and truly messed up in the best way possible.

As the gang, Kevin, Jenny, Taco, Ruxin, Andre & Pete all compete for their beloved Shiva (their trophy is named for an unfortunate high school classmate who in fact grew up to be a hot awesome doctor.) and of course, if they lose get the loathed Sacco.

The League was something I wasn’t sure if I would like or not, because I mean, look, it can get a little bit vulgar and pretty sexists and super homophobic. But I’ve learned something about myself, when the work is good enough, I can ignore those things. If I’m laughing, or I’m compelled, then I turn into a hypocrite real fast.

It’s why I finally had to give up Sons of Anarchy, that show was no longer good enough to deal with how shitty it was towards women.

Anyways, let’s talk about The League, not about my fluctuating feminist principles. I just really like this show and I’m glad to see that it’s back. It’s another one that if I had all the time and resources in the world, I would absolutely do weekly recaps of, but well, I’m just me, and I have a job that isn’t writing this blog. (Although, if only, right guys? Ugh.) Anyway, the season premier, which traditionally focuses around the gang’s draft sent them to the funeral of sattelite player Ted (played by the lovely Adam Brody.) Obviously, they had to draft with Ted’s dead body present and when they draft.

If you know the show you might think that you know where this is going but I assure you that you do not.

Kevin accidentally leaves the draft board in Ted’s coffin, and thus they must create a heist in order to get it back. It gets super convoluted, Kevin and Jenny have sex in a morgue and Taco winds up in the coffin.

Go Giants! (Oh shut up, I know they kind of suck this year!) 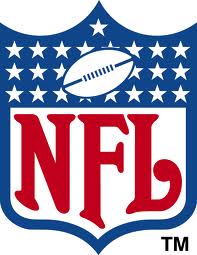 People that didn’t grow up in football houses never quite understand my relationship with the game.

It’s much deeper than that.

Football is just a part of things in my house. My grandfather is a Giants season ticket holder. Anyone who knows anything about football knows how rare that is. Phil Simms and Lawrence Taylor were the first celebrity names I knew. We were a football house. My brother played football, my sister and I were cheerleaders.

I’m very proud of having been a cheerleader. It’s a strangely unfeminist thing to say, but I think it’s important. Not that little girls shouldn’t be allowed to play football if they so choose, or little boys shouldn’t be allowed to be cheerleaders if they so choose, but there’s something strengthening about cheerleading. It teaches you how to be a part of something without being the main event. If there’s anything that children and teenagers need to learn it’s that they can contribute without being the center of attention.

I spent every fall weekend of my life from kindergarten through eighth grade at football games. By high school I was fed up, so my parents stopped making me go. I’d chosen musical theatre over cheering, and still attended the occasional Friday night game when the boys schools that my friends attended played each other. But for the most part I felt free of football, and it felt great.

But sometime in December of 2007, that changed. I was a sophomore in college, and I started to really miss football. My college didn’t have a football team, and was in a small city that didn’t have an NFL team. For the first time in my life, football wasn’t a presence in my life, and I really missed it.

It also didn’t hurt that my family’s beloved New York Giants were on fire. Watching football became fun and exciting in a way it hadn’t been for me since I was a little kid.

Then the impossible happened. That February the Giants entered the Superbowl, and defeated the undefeated New England Patriots. Everyone was flabbergasted. How had it happened? How had Eli Manning, who’d always been talked about as sloppy, as champion Peyton’s less than little brother, beaten Tom Brady, probably the best quarterback of this generation? I still don’t know.

But I did know that I was excited about football again. The next season I went out of the way to watch every Giant game. When the season was less than stellar I started following The Indianapolis Colts (I love my Manning boys!) and The New Orleans Saints. 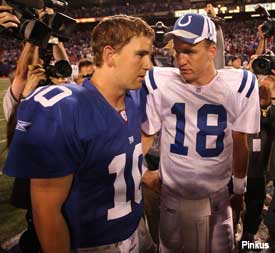 This is real love.

Yesterday was the first Sunday of the Football season. The Giants weren’t playing. They already celebrated their Superbowl victory by losing spectacularly to the Dallas Cowboys (Booo) on Wednesday. But I still woke up, watched two episodes of Buffy The Vampire Slayer took a shower, threw on a pair of leggings and my Peyton Manning Colts jersey (now defunct, as Peyton plays for the Denver Broncos.) and trotted downstairs. Until February, this is how I’m going to be dressed every Sunday. Though I will be wearing either my Eli Manning jersey, or my Victor Cruz jersey.

And I’m going to fangirl all over it.