Ah, waking up with a hangover in Disney. I’ve done it every trip I’ve taken since Juli and my trip 2 years ago.

This time, while Tom got ready, I trekked down to the food court again, returning with Biscuits and Bacon, and we quietly, but with great speed, found our way to the bus to head to Hollywood Studios.

The plan was to ride the 4 rides there and then head to Epcot for our brilliantly planned Brunch reservation at Spice Road Table.  We did succeed in that.

First we hit Rockin Roller Coaster, which is always a good time. 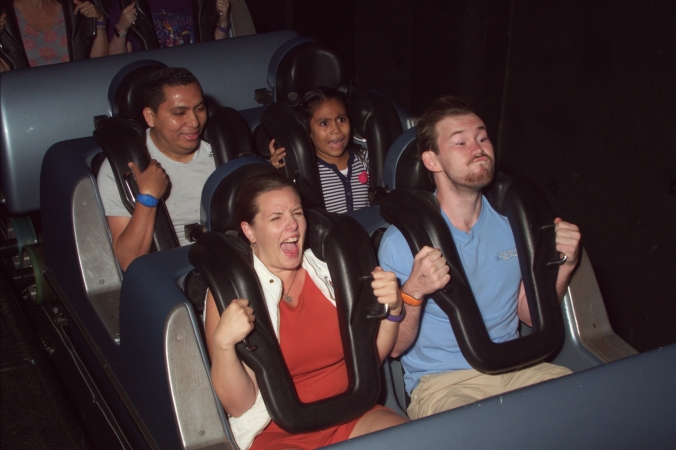 It was Walk On (Thanks Extra Magic Hour!)  and rather than jump right over to Tower of Terror (I learned, from the stomach issues of the past) we headed to Toy Story, which again, we walked on to. Next we backtracked to Tower of Terror, which was showing an 85 minute wait time.

The cast member at the front said it was likely to be closer to 40, so we shrugged and headed in to wait in line.

I want to make it absolutely clear that I actually looked at the clock every step of the way. From entering under the gate to watching the video in the library, it was 10 minutes. From exiting the library to entering our elevator, it was 10 minutes. We waited 20 minutes for a ride that was marked with an 85 minute wait time. (I told you this would be a theme.)

Tom is saying something profound, I’m sure…

Tower of Terror was great, it always is. After that we headed right over to Star Tours, where again, the wait was brief, but I love that queue so I’d wait, like a maximum of 40 minutes for that ride.

Tom nearly got sick so, we opted to skip Muppets, because seriously, nausea + 3-D is rarely a good combo, and we headed to the Launch Bay. The lines for the meets were a little bit on the long side, so we opted to head to Epcot, since Frozen Ever After was showing a 40 minute wait.

We skipped off to the boat and rode over to Epcot, happily discussing our strategy (Tom feeling much better) and wound our way over to Norway, to get in line for Frozen, now showing 35 minutes. (At 11:15! Prime World Showcase arrival time. I was flummoxed). I set a timer, because I was curious. The Ever After line is a good one, once you get inside, full of things to look at and nice music and AC, but we didn’t even have to walk through Kristoff’s Ice House, and only wound around the town square once, and we only caught a glimpse of Oaken, before boarding our boat to the Mountain 15 minutes after getting on line. 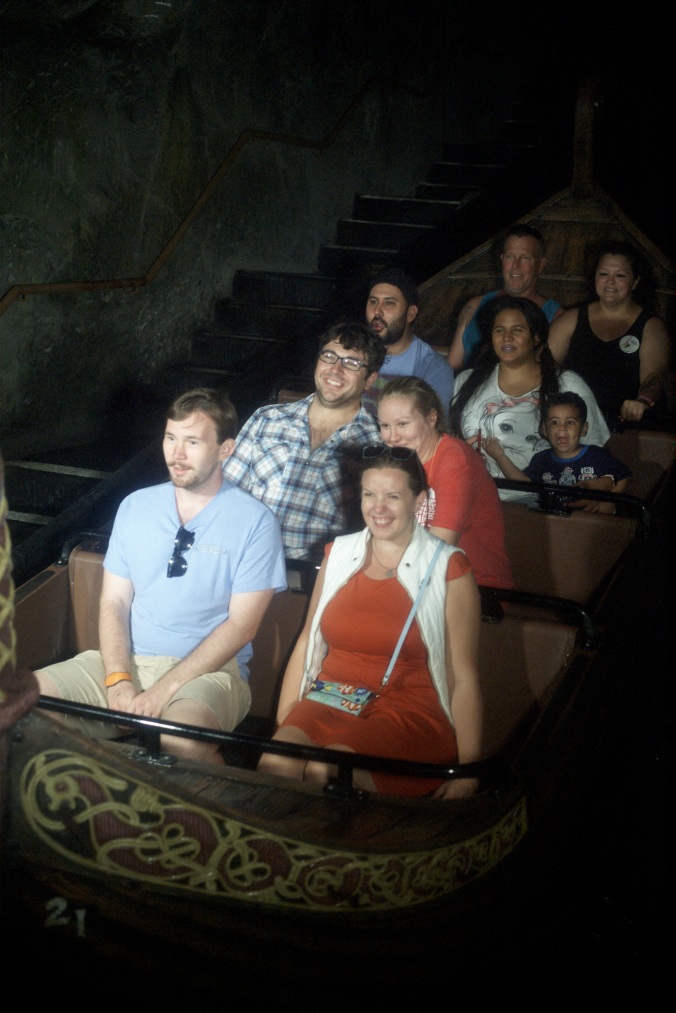 I’m still smiling huge because the line was so short!

I’ve ridden it with a Fastpass and had the line take longer than 15 minutes. I declared after our trip to see the whole gang, (and Tom’s agreement that Sven is a most impressive Animatronic) that I would ALWAYS come this time of year now, Hurricane Season Be Damned, because OMG 15 minutes? We were now late for our reservation, though I doubted it would be a problem, and we headed straight on over to Morocco.

Spice Road Table is on my “favorite restaurants in Disney World” for a reason, you guys. It’s a lovely place, small but not claustrophobic, interesting but accessible food, and never crowded. This was the first time I ate inside the restaurant, which was very different, and the first time I at there during the sunlight.

Tom helped himself to Lamb Sliders, and I went for a combination of hummus fries (BESSTTT) and Rosemary Brie Fondue. Both were excellent, and drinking a Pomegranate Mimosa made it officially Brunch.  (It’s not brunch without champagne drinks!) Post food and ooohing over the view, we headed to the front to get our bus for afternoon nap.

This nap was even more necessesary than the previous, and also featured football watching. I went and grabbed a soda at one point, and I ate the rest of the biscuits, because if I don’t eat every hour or so I get cranky, and also they were there.

The final thing I did during this break, was run down to the store and pick up a Christmas ornament. See, I have my own apartment now, which means that for the first time in my life, I will have my OWN Christmas tree, which means, I need stuff to put on it.

Because I am who I am, I know that there will be a healthy amount of Disney representation on that tree, just generally, but I wanted something to specifically remember the oddness of this year and the four trips that went into it. I came up with the idea of getting an ornament from each resort I stayed in, which can become my tradition, even AFTER this crazy Disney year ends, when I stay in different resorts. (My dad is determined to return, and we’re likely to stay either on the Boardwalk or on the Monorail loop then…) So, I grabbed the Riverside ornament this time. (I also got a Saratoga Springs one, but that’s for the report on Monday of this trip!)

Once all of that was settled in, we headed down to get on our Magic Kingdom bus, for our last park excursion of the trip, and some Halloween time fun! (WEEE!)

Stay tuned for more on that!