The main even of this trip was always going to be checking out, at the very least, the rides over at Pandora: The World of Avatar. We didn’t get a chance to explore much in The Valley of Moara, that is, the stunning portion of Pandora where you are transported for this land, BUT, we did see a lot of it, even without a calculated walk around because of how the line for Flight of Passage is set up.

Anyway, onto the narrative. I awoke before the sun, at 5 AM, due to my bladder have none of this “sleep without emptying me” foolishness. I was annoyed, because while I had planned on being up between 6 and 6:30 (also before the sun), that extra hour can mean a world of less crankiness from me. But alas, it was not to be.

Even more annoying though, was that River Mill Food Court didn’t open until 6:30. so not only was I up, I was up an hour and a half before coffee was an option. Plus Tom was sleeping and I didn’t want to wake him by turning on all the lights and moaning about how there was no coffee.

So I surfed Facebook on my phone. (OBVIOUSLY) I looked at our Touring Plans (Touringplans.com, if you’re planning seriously, WORTH THE SUBSCRIPTION!) made some tweaks, and figured out some timing. I also got ready.

I wore a new Rapunzel Themed Disneybound, that is FOR SURE getting worn again for the November trip with Juli and Dom, because it was a huge hit. Also, it’s very comfortable, so it’s a win.

Once 6:30 hit, I went to the food court and got my Lorelai Gilmore on, (came just short of shouting “COFFEE, COFFEE, COFFEE!” at the poor cast member checking me out.) I picked up a chocolate croissant (Disney Food Court Pastries = love) and a cinnamon roll, which we picked at as we got ready.

We were at the bus stop by 7:15, and the turnstiles for Animal Kingdom by 7:45, about 5 minutes after that, we were brought it to a pathway to check in as resort guests.

Then we were held for the remaining ten minutes, until we could move towards Pandora. 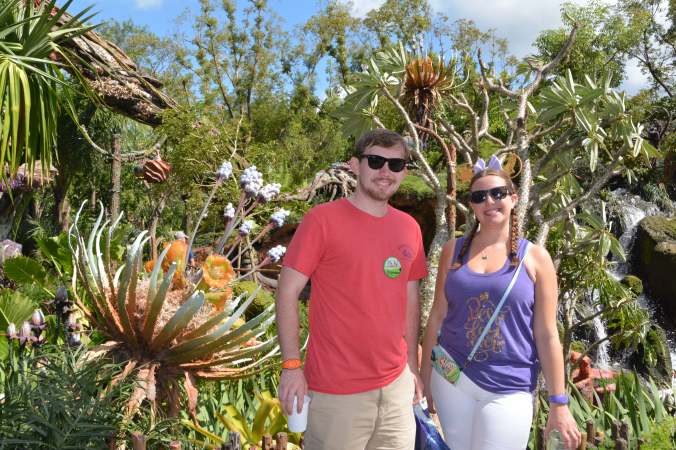 Walking in was a little bit of a gust of wind. The floating mountain is very cool, and the fauna all around you a bit much at first. I wasn’t sure if I was going to cotton to everyone’s gushing over this place. Once we got in view of the waterfalls, however, I was sold. I also can’t wait to see it at night!

The best part about waiting on line for Flight Of Passage is that it curves you through most of Pandora. You see almost everything on this line, which makes further exploration kind of moot. You also see a Navi cave, a science lab, and an elaborate pre show explaining what banshees are the way that you’re going to ride one.

And then there’s the ride itself. It’s not exactly a secret that Pandora was built as an answer to The Wizarding World and that Flight of Passage is meant to stand in for Forbidden Journey, and from what I remember of Forbidden Journey, Flight of Passage is WAY more impressive as a ride, even if the queue, despite it’s loveliness will never measure up to walking through Hogwarts castle.

But the ride on the banshee is incredible.

Next we hurried ourselves over to the Navi River Adventure (or whatever unweildy name it has), which is beautiful, and the shaman audio animatronic is really really cool. That also has a fun queue (a large woven structure.) After the river cruise, we decided to head into AK proper and take a safari, and while it wasn’t the best ever (February still gets that), it was pretty good, followed by an early lunch at Satuli Canteen.

I went for the chicken bowl, with sweet potato hash and vinagrette dressing, and I had the Grog Ale. Both were delicious.

After lunch there was some shopping in Pandora, and then a quick jaunt up Everest, which, showed a 40 minute wait time that came in closer to 20. (You’re going to notice a theme this trip.)

Then it had reached the ungodly hot portion of the afternoon, so we went for our bus and headed back to the hotel room for water, relaxing and AC…before moving on to Part 2 of our day…Epcot, for Food and Wine, Soarin, the history of communication and yelling about under represenation of stuff in merchandise. (That third one was mostly Tom…I’ll explain!)

Oh, and before THAT I had a photo shoot in my Rapunzel Disneybound!