So because I have apparently lost my mind entirely, (and also…well, it’s kind of a long story…) I headed back to Walt Disney World this past weekend, only 2 months since I left it previously. This wound up being a solo trip, which was great. I’ve now done this twice and I’ll keep doing it occasionally I think. (Not always to Disney, but I have every intention of traveling a bit more next year!) So let’s get started.

I took a 6 AM flight, because it was cheap, and it wound up being a really good call. I got to the airport at 3:45 AM, and napped at the gate and on the plane. Landing at 8:30, I quickly made my way to Magical Express, and settled in to do my makeup while I waited for the bus, as Kristi and I had last trip. Not before I blended my foundation and concealer did my bus show up! YAY!

I finished my makeup while waiting for the bus to fill, and by 10:30 (yup, 2 hours again, I was less stressed about it this time…) I was at Animal Kingdom Lodge and changed, and THEN I got the text that my room was ready. (WHATT?)

So I found said room, and stored my carry ons, and then headed over to Magic Kingdom. It was a fifteen minute wait for that bus, and I just kept thinking, “here we go again!” When it came to transportation woes, and forsaw many MANY Lyft rides in the future of this trip… 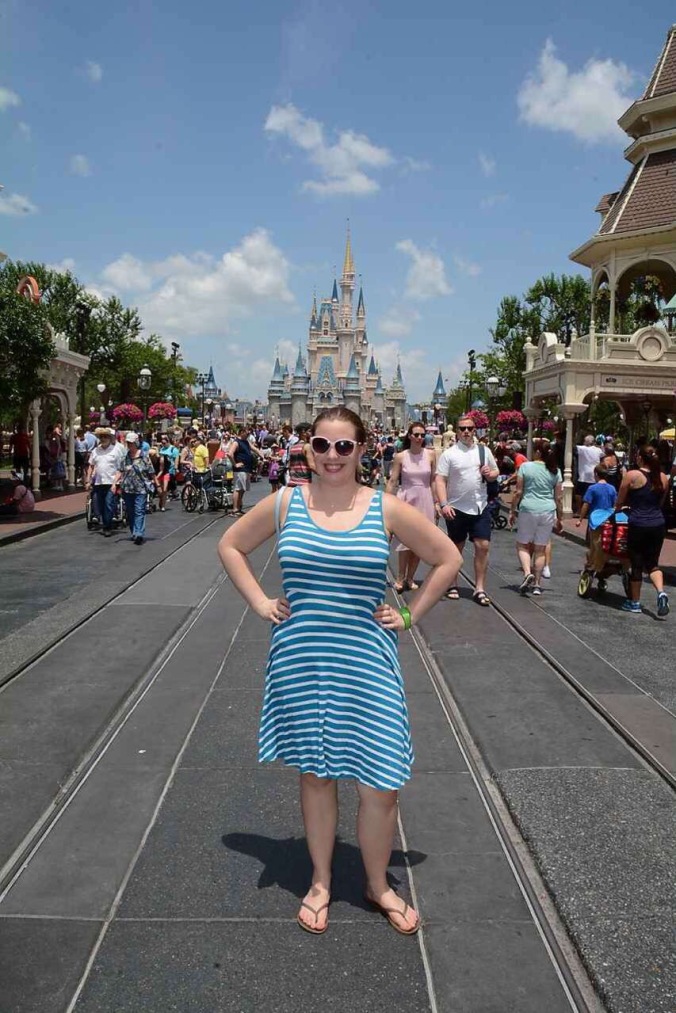 So how was it? Well…the food was good. I ate the Croque Monsieur, which came with frites, and had a Diet Coke and The Master’s Cupcake. (Grey Stuff icing on a chocolate cupcake.)

It was great. The sandwhich was well grilled, with more ham than cheese, and on very good whole wheat bread. The Frites, were frites, not American style fries, but thin cut and crispy, which is a nice detail. The cupcake was good. Not my favorite delivery service for Grey Stuff. (That would be the Tart that I had it in at dinner in February, followed by, “alone” and then the brownie and then the cupcake)

I know this makes me both a terrible White Girl (TM) and Disney Fan, but I’m not crazy about cupcakes. Or cake in general.  I like cake, but it’s not by favorite sweet or desert. I prefer a flakier pastry like a croissant or Napolean, or something a little bit thicker, like a pie or tart. Actually I’d always pick pie over cake, given the choice. Which is why I prefer the tart to the cupcake. But, it’s an exceptional cupcake, very moist, chocolately and not only topped by, but filled with grey stuff. Which is, you know, delicious.

But I digress, I ate in The Rose Gallery, which I really love, and I’ve now eaten in all three rooms of Be Our Guest as well as all three meals. Here’s how I rank them:

I love the music box so much!

I then headed over to The Haunted Mansion, because, I mean, have we met? I chatted and made friends with a mother and daughter on line, and was thrilled that my first ride was also my favorite. I exited and toyed with going on another ride, but I also really wanted to take a shower, so I decided to head back to the hotel and told myself that if my bags were in my room (A rented studio villa, BTW…this room is HUGE…) I would shower and then head over to Animal Kingdom. If they weren’t I would explore the resort, maybe get a drink or some food and THEN take a shower, assuming my bags would have shown after that. The bags were in the room, so I opened up the bottle of wine that I’d packed…unpacked, and then showered and put on my first Dapper outfit.

What I had planned on wearing, I haven’t quite lost enough weight for yet. (I am down 25 pounds since Christmas and about 35 overall! I’ve done it on Weight Watchers…do I get to talk to Oprah about bread now?) So, Mom and I scrambled on Wednesday night and put together this adorable, Jackie-O on Hyannis type look. The white jeans were actually bought for the last trip, and I wore them on Day 1 then too. The top I’ve had for a while, and you might recognize it from my Maergary Tyrell casual cosplay! I put my hair in a bum and tied a scarf around my head, and wore a pearl statement necklace that Mary gave me for my 26th B-day and some cool funky earrings. I also grabbed the Finding Nemo purse that Julie made for me, and headed right to Animal Kingdom.

I waited a grand total of 3 minutes for a bus. Which was a delight. I got to Animal Kingdom and just WANDERED for about an hour. I also got a mojito. I drank a lot less on this trip than last, because I’m trying to drink less in general these days, but I’m not a pod person. Anyway…Mojitos at Dawa Bar, not quite my friend Cha’s mother’s home made ones good, but REALLY good. I did the Maharajah Jungle trek, because I wanted to see the tigers, but their area is currently under construction, so no tigers, bats and birds galore though.

That was followed by Everest which only had a 30 minute line and no single rider.

I also had a fast pass, but the coaster wound up broken down, so I was very glad I wound up doing it. I then grabbed another drink from Thirsty River, and decided to wander some more, and wound up right at Adventurer’s Outpost where there was only a 10 minute wait, so I decided to say hey to Minnie and Mickey.

There was so more wandering, and eventually, I found my way to Character Landing and said “Wangapo” to Pocahontas, and this round of “Reenie meets Princesses” began. (My objective: Meet all the Princesses I didn’t meet last time…I did it, AND THEN SOME) Both Pocohontas and Minnie loved my outfit.

I was getting pretty hungry so I headed to Nomad Lounge which was HOPPING because it turned out the Disneyland Imagineers had had their tour of Pandora that day. I chatted with the bartender, ate some fish tacos and tried the Night Monkey (delicious, I had two!) (I was pretty drunk by this point…) I headed to redeem my safari fast pass.

It wasn’t the best safari…I miscalculated, thinking sunset was around 7, when it was actually 8…so most of the animals weren’t mobile and it wasn’t yet the cool “Sunset effect” and the nocturnal animals weren’t active yet…there were more deer and antelopes than I’ve noticed before but I think it was just because there were no giraffes or rhinos or whatever to distract me. 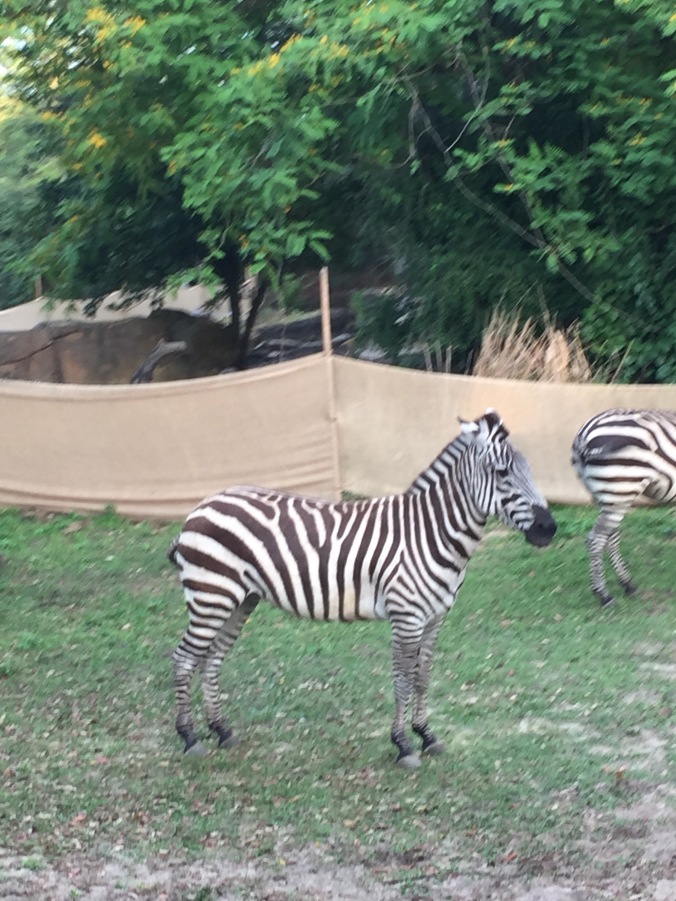 My next move was to get something more to eat, because while the fish tacos were yummy they were also tiny, and I had had a lot to drink. I wound up grabbing some falafel at Mr. Kamal’s, and a frozen Coke with Rum and decided to check in for Rivers of Life. There was still a good half hour before the show, but I had fried chickpea to eat and wound up chatting with a couple who were up from Jacksonville with their two young kids. We talked about the renting DVC points thing, which they were intrigued by and I heartily recommended. I explained that it could be kind of a pain, but that I was REALLY excited to get to have the rooms that I’ve had for the past two trips.

Rivers of Light itself started at 8:45, and I really enjoyed the show. The projection onto the water is very cool, as are the lotus and animal floats, and well, the whole thing really. It reminds me a lot of Illuminations actually, which, as Illuminations is my favorite show at Disney World…I think speaks very highly of it. It’s a little bit slow and arty, like Illuminations, and ties into themes about shared humanity and our planet. Unlike Illuminations, no fire or fireworks, because you know, you don’t want to scare the animals.

I hoofed it out quickly to the Disney Springs bus, in hopes of going to the Dapper Day meet up at the Boathouse. I did, and did get a beer, but no one was really chatting with people out of their own cliques, and I was pretty drunk and full and had been up since 2 in the morning, so after hitting Market Place Co-Op to see the new Dress Shop (AMAZING) and buying a really cute Tower of Terror Necklace (CUTE) I got lost looking for the bus stop and saw bits of Disney Springs I haven’t yet.

The regular “mall” portion of the area really reminds me of Las Vegas, in a good way. I think it’s going to be a thing going forward that Disney World actually competes with Vegas when it comes to young adults going on vacation. I know I prefer it. I spend the same amount of money on park tickets as I would gambling and have a way better time. (That said I did really like Vegas when I went, and would go again…)

So then it was back to AKL, and while Victoria Springs still had life going on, I knew I needed to crash, and crash I did.

I was up bright and early for my first official Dapper Day at Magic Kingdom…for that read tomorrow!