OK everyone, I’m done hesitating about this show, I’m completely in love with it. It’s so perfect in every possible way. 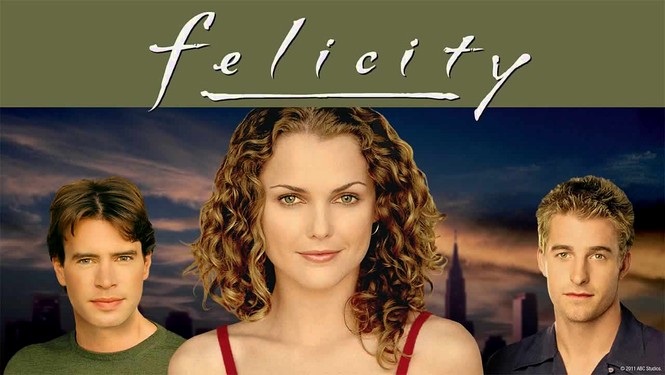 So, Javier is getting deported, and he asks Felicity to marry him for his green card. She agrees because she’s a people pleaser. Noel isn’t thrilled but is sort of dealing with his own crisis, in that his older brother Brian has come to town and come out of the closet.

So Noel’s freaking out about that, and his girlfriend marrying his older gay man. These two stories don’t really dovetail at all, but it’s sort of a weird queer themed episode. Anyway, as Felicity learns that a green card marriage is way more complicated than she thought (no duh).

Meanwhile, Ben has been swimming and wants to try out for swim team and also he’s being kind of a jerk to Julie, but he does tell her that he misses being part of a team, so she encourages him to try out. He makes it! He also makes friends with a couple of people from the team, which becomes more important next episode.

Anyway, Javier’s boyfriend basically calls off the marriage, which is a huge relief to Felicity, and Noel comes around, kind of on his brother’s gayness and even meets his boyfriend, which is nice.

Hannah’s back! (Jennifer Garner, SO CUTE) And Noel is confused, so is Felicity. She’s even more confused as she starts to talk to Eli, a cute painter boy who she’d met previously when checking out the art studio. Even Elena thinks he’s cute and that is high praise.

Meanwhile, Julie is getting ready for an open mic night and also she’s kind of over Ben’s swimming friends, who apparently are kind of the worst. Ben is less than sympathetic. But Sean’s really nice about the whole thing. Seriously they’re cute. Then it turns out that Ben’s annoying swimming friend is actually really cool and helps Julie tune her guitar and is actually quite nice. Ben, however, still the worst.

Noel breaks up with Felicity because he’s confused about his feelings, and starts to get back together with Hannah but decides he’s too confused for that.

I am rapidly becoming annoyed with Noel. Meanwhile, Felicity hangs out and then makes out with Eli. GO GET YOURS FELICITY!