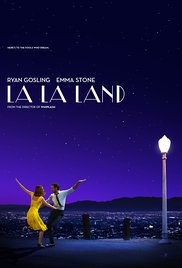 And that’s La La Land. I mean, I’ll have to watch it a few more times to really know if it will stand along side Good Will Hunting or D2: The Mighty Ducks or Dogma or Sabrina or West Side Story, but I think it’s got a good shot. (Yes, I am aware that two of those movies don’t quite fit on that list. And yes I’m leaving it up to you which two those are.)

Emma Stone and Ryan Gosling reunite (Crazy Stupid Love once got close to this list.) as two Hollywood dreamers, Mia wants to be an actress and Seb wants to save jazz, specifically by opening his own club. They have a whirlwind romance, punctuated by several old fashioned Hollywood musical numbers and blowing up when their dreams don’t pan out quite how they plan.

I was enjoying the movie the whole time, it’s hard not to be enamored of Gosling and Stone, but it’s the final piece that  pushed it over the top. Flashing forward five years, we see that Mia and Seb’s dreams have come true, but they’re apart. They collide for a moment and in a stunning tribute to An American In Paris, we see a fantasy, all in dance and pantomime of the road not taken.

La La Land is my favorite movie of the year, and might well make it to a totally different level of love for me. We’ll see.

There were a bunch but mostly FENCES…Oh Good, god Fences. I’ve seen the trailer so many times and I’m still blown away with each one.