Hey all, Renn Faire got bumped again. (I was able to take pictures this time, but, well, something came up.)

What did happen this week was that I saw Hamilton. So, I decide to pay tribute to it via my closet cosplay this week, and…because of Lora, I’ve very much felt the need to up my game.

I decided the Schuyler sisters were the best way to go, so let’s start.

This is what I wore on Tuesday to the show. So, I went with a black flippy skirt, a pink tank top with some macrame on top.

I decided to do some focus on jewelry for these in a big way. Angelica got some Tory Burch style earrings (You just know that the Schuyler sisters would be preps.)  and a necklace that was a gift from my friend Cha that says, “Nothing is impossible to a determined woman.”

I wore my riding boots (again prep!) because they also look straight out of the Hamilton costume closet.

Eliza felt the need to be softer and a little more traditional than Angelica. So, I went with a breezy blue crop top and my pencil skirt, super feminine and very sweet. I also did combat boots though, because she’s sweet but also tough as nails.

Eliza’s jewelry is my oversized pearl earrings and a small necklace with a blue stone and pendant that says “ma soeur” (my sister in French) that my sister got me for Christmas a few years ago. 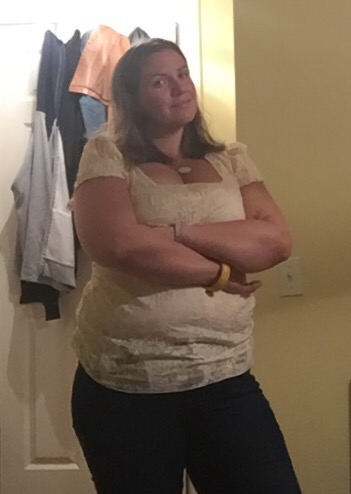 Peggy’s the yellow one! Anyway, for Peggy I wore a yellow peasant top and jeans and my frye boots. Again, I’m pushing the prep factor.

Peggy’s jewelry is a pair of stone set earrings and a blue a yellow colored glass pendant that my uncles gave me for Christmas one year and a yellow wooden bangle.

Anyway, that’s what I did this week. I had a lot of fun with it.