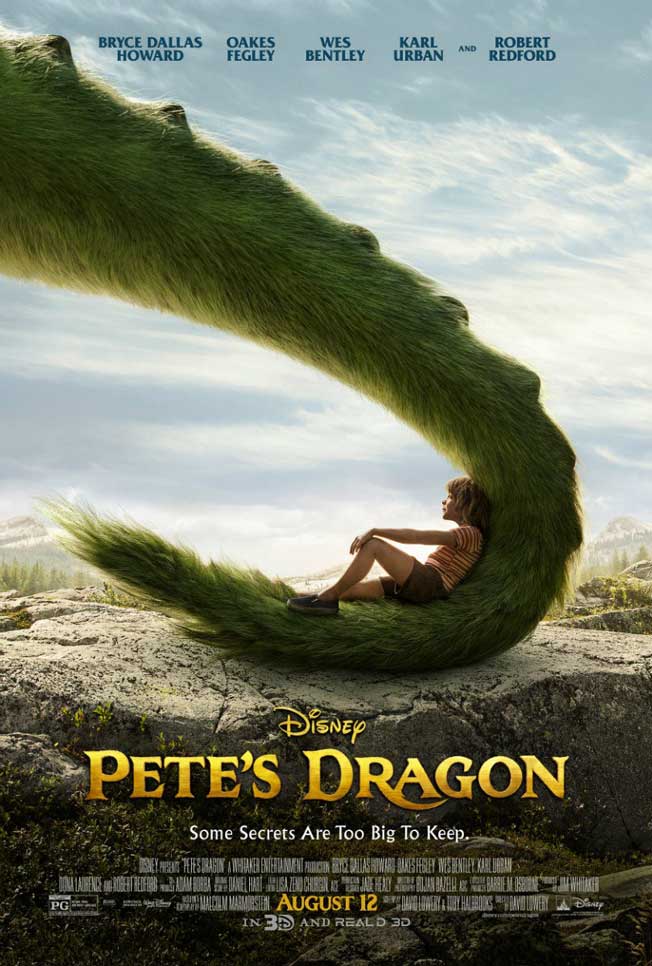 Like every trained musical theater singer since 1977, when Pete’s Dragon was initially released, I have stood in front of an audience and attempted to melt hearts with the plaintive ballad, “Candle On The Water.”

So I went into the new version this week, ready for Pete’s Dragon to tug on my heart strings. I did not expect to weep my way through the third act and still be crying when I got home. This movie is beautifully emotional and terribly sweet and absolutely lovely.

I barely remember the original movie beyond the song, but I think I was pretty fond of it as a child, and the image of the little boy Pete, curled up with dragon Elliot has pretty much been stamped in my brain. And that gets reproduced ten fold. Oakes Fagley is incredibly endearing as Pete. This is one of the greatest ever child performances, almost completely natural. Also, he roars at a bear to try to scare it away, and your heart melts.

Bryce Dallas Howard is all love and warmth as Grace, the forest ranger who finds Pete, and Robert Redford brings a certain folksy gravitas to the proceedings as her father, who once encountered Elliot on a hunting trip.

The movie keeps the story small and focused, which makes the spectacle of a CGI Rendered dragon all the more special, and allows the sweetness of the characters to come through fully. Even the antagonist, a logger played by Karl Urban isn’t nasty, he’s just, well, confused and a little bit shallow. (Although his eventual plan does basically come down to “Part 1: Catch Dragon; Part 2: ????; Part 3: PROFIT!)

I’ve ranted about Disney being on a roll, and it really isn’t stopping, but what’s most interesting about these remakes is finding new ways into these stories, while keeping their hearts. Pete’s Dragon has a lot of heart.

Moana: I’ve seen this trailer so many times, and I love it more and more each time. I’m so excited for this movie, and I’m even more excited to be in Disney World with a new princess to meet! (And Lin-Manuel songs to sing…)

Sing!: This looks so goddamn charming even if it also looks a little bit stupid.

Fantastic Beasts And Where To Find Them: Look, if the past week has taught me anything it’s that I’m never going to be able to leave The Wizarding World. I will take whatever door I can to get there.

The Queen of Katwe: This movie is going to make me cry a lot, I have a feeling.

Monster Trucks: This looks dumb as anything, but also charming and has Jane Levy in it. I miss Suburgatory enough to see this dumb movie about monsters who build truck engines.