As we gear up for the finale of Game Of Thrones Season 6, I decided it would be fun to dedicate this week’s closet cosplays to Westeros. I don’t have a con ready cosplay for GOT, though I am working on getting my Maergary party dress in shape for it/Sansa’s Wolf dress to be a thing at all. 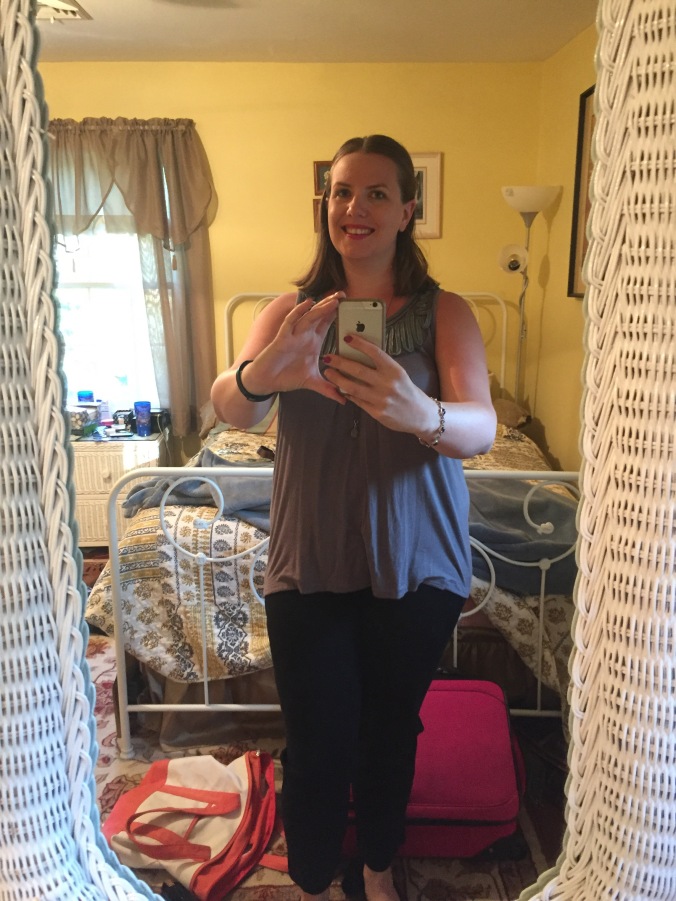 After last week’s episode, it made absolutely no sense not to kick the week off with Sansa. I brought out the grey tunic that I wore for Eponine again, since grey is a Stark color. It also had some cool embroidery and embroidery is kind of Sansa’s thing. I also wore a pair black stretchy pants that land at the ankle, Audrey Hepburn style, which I think fits Sansa (being the consummate lady and all.) Add in my Ugg Flats, which are technically winter shoes, because of the North.

Jewelry was a tougher call for Sansa than any other before, but I landed on a long pendant with a tree of life on it, to represent the Heart Tree of Winterfell, and of all over the North really. Of which Sansa is now the Queen. The Queen In The North. BUT! I added a piece I’d forgotten about. I have a bracelet that’s twisted silver around purple stones, which, you may remember were the color of the stones in Sansa’s necklace/hairnet (depending on show or book version) that were used to poison Joffrey. 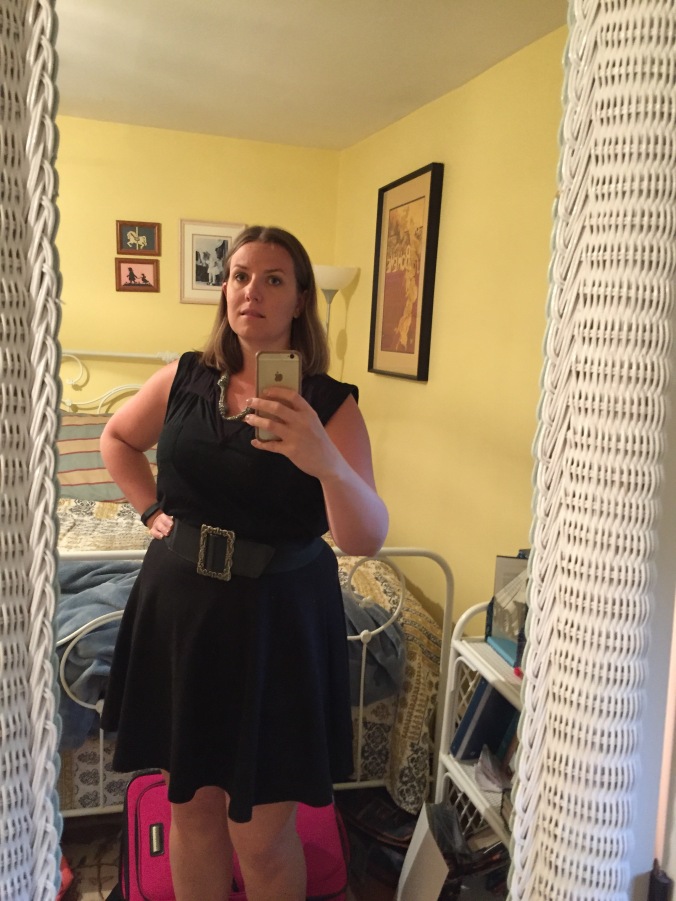 Probably my favorite of the week. On Tuesday I took the black. Because of my retail background I have a surplus of black clothing and was easily able to put a bunch of it together into a very cute outfit.

The shirt is another H&M buy, and it actually a tunic, but I tucked it into the skirt, which is New York & Co, I added the thick belt from Kohl’s in order give a sort of “armor” look. I also wore Combat boots (obviously) and a necklace my cousin Catherine gave me for Christmas a few years ago that’s made out of chain mail! I also did a little bit of old school mall punk emo smokey eye, something I haven’t even attempted since high school!

If I was going to get through hump day this week I needed an extra power boost. And I got it by dressing up as the true queen, The Breaker of Chains, The Unburnt, Mother of Dragons. Channeling Dany was surprisingly easy with my wardrobe. I wore a brown corduroy skirt and a cream crepe top (adorned with silver beading.) and I borrowed the Targaryen family crest necklace that Mary has. (Thanks sis! She was actually a big help in this whole project)

The tough part here was the hair. My short summer hair does not lend itself to intricate braiding, and certainly not first thing in the morning, when I’m in kind of a rush. I did figure out though, a cute way to handle it. I braided small strands on the underside of my hair and pinned them up. I was actually very happy with how it came out. 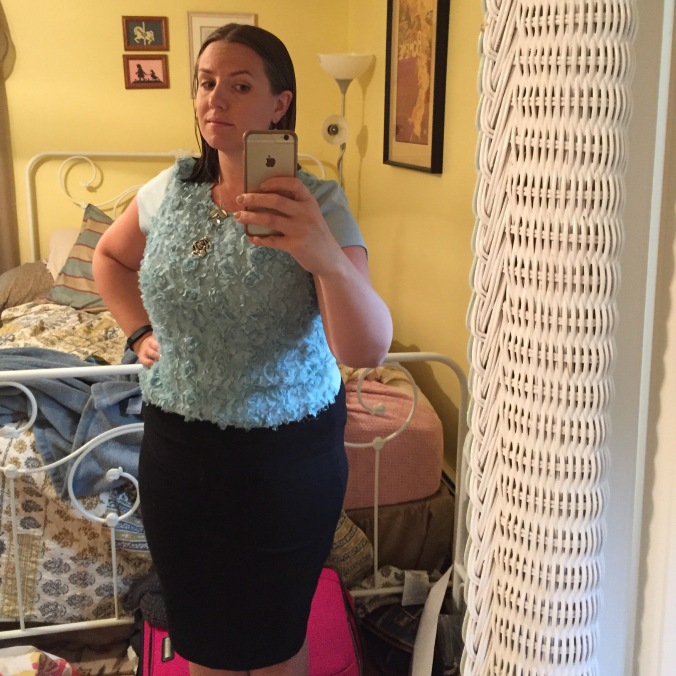 I wasn’t going to go through this week without channeling my absolute forever fave, and I put  a lot of thought in the Maergary outfit. I went with a black pencil skirt because I think that the kind of controlled sexuality of that kind of garment really fits her character. I added a blue crop top which has rose petal cut outs because she wears a lot of blue and Roses are the symbol of House Tyrell.

I wimped out on my hair because my Khaleesi hair sort of wore me out and also I overslept. But I obviously wore my Maergary necklace, and I also have a pair of earrings that Mary gave me that have flowers on them.

This costume is a little bit different, rather than just trying to get across someone’s essence, I made a work appropriate version of one of Missandei’s actual outfits. Also, I was originally planning on doing something for Arya, but I couldn’t figure it out and Mary suggested that I try Missandei, who is very high on the favorite list!

Anyway, I wore my grey maxi dress, with my leather vest from my Black Canary costume over it, and gladiator sandals. I was trying to recreate this costume:

I think I did OK.

Overall I had a lot of fun with these outfits. I do think it’ll be a while before I do a full week of closet cosplays again though. It was a lot of work and organizing, which while I enjoyed it, is effort that could have been spent elsewhere.

Anyway, everyone enjoy the weekend, here’s hoping we get a Stark Sisters reunion on Sunday. (I doubt it, but we can all dream.)

One thought on “Cosplay Corner: You Win Or You Die”