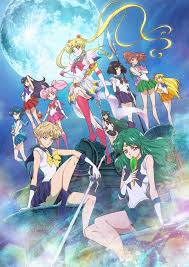 MY OTP JOY IS EVERYWHERE!

A lot goes on in this episode. But the most important part is that somewhere in the ether, Hotaru’s soul is protecting Chibi-Usa’s soul. And also schooling her on hanging on to her Legendary Silver Crystal.

I think this is the first time that I’ve caught on to the fact that the Legendary Silver Crystals are tied to the life force of the Usagis. I mean, it makes sense it just never quite hit me. This is why Crystal is often good for me, because they tend to spell things out pretty unambiguously.

I’m not always great at nuance.

Anyway, Mistress 9 commissions The Professor and Kaori to vessilize dark eggs or something, as she channels the power of Master Pharoah 90. Meanwhile, Super Sailor Moon and The Outer Senshi head down to face whatever’s coming for them.

Usagi thinks about how she’s mostly useless on her own (not true) while Sailor Uranus explains that in their previous lives, the idea of their princess was an inspiration to them to hold their positions as guardians. I love the idea that Sailor Moon is a rallying point and symbol, as well as immensely powerful in her own right.

In the end, they arrive at a basement and have to fight The Professor and his Daimon’s, which he then absorbs and becomes a giant Daimon monster which is terrifying. It’s great, however that eventually they put him down, and it’s a big win. I’m sure that in the next few weeks Saturn is going to appear, and I’m very excited for that. Hotaru is finally starting to fight back and I’m excited about it.

Overall I’ve been thrilled with this season’s representation of the Outer Senshi. The thing that I think doesn’t come across as much in the original anime is how stalwart they are. These three especially stood at their posts, knowing that something terrible was happening to the world they loved but only had glimpses of. This comes across in big ways in this version and it’s pretty wonderful.

I was glad I was able to squeeze this episode in! It’s funny that I started doing the One Tree Hill rewatch in order to fill space, and this week, I literally do not have enough space to cover what I want to cover. (I’m not complaining…) but I am realize that in a few weeks I’ll be losing a mainstay of the blog, which is my Sailor Moon coverage, so I’ve been thinking a lot about what it’s meant to me…and it’s meant a lot!