So, this went up Early (eek!) and before it was finished…so I took it down and here’s the completed one! Anyway, here’s my report on Saturday of my trip last week. (Sunday report will go up on Friday! YAY!

Saturday didn’t start out super awesome when the travel contact solution I’d bought turned out to be super industrial strength or something because it burned my eyes. So I ran down to the lobby and bought a different one but it was clearly a glasses day. Which was fine! I like the was my glasses look, although it was tough to not have sunglasses…Anyway after that drama and screaming of the f word repeatedly I got on the bus to get to Animal Kingdom for Extra Magic Hours!

I pondered how great it felt to be riding a free bus rather than paying for an Uber plus getting to be in the park first thing! I went on Kilamanjaro Safaris first thing, which was amazing, and I really couldn’t get over just walking into rides I have distinct memories waiting hours for. Then I rode Everest, and then I went on the Maharajah Jungle Trek, where I got to see my spirit animal, that tiger (didn’t make it to that last time) and then I went on Primeval Whirl, which I really really liked!

I rode Everest two more times, and headed to brunch at Yak And Yeti, where I ordered a mango daiquiri that knocked me on my ass, pot stickers and a mandarin chicken salad. 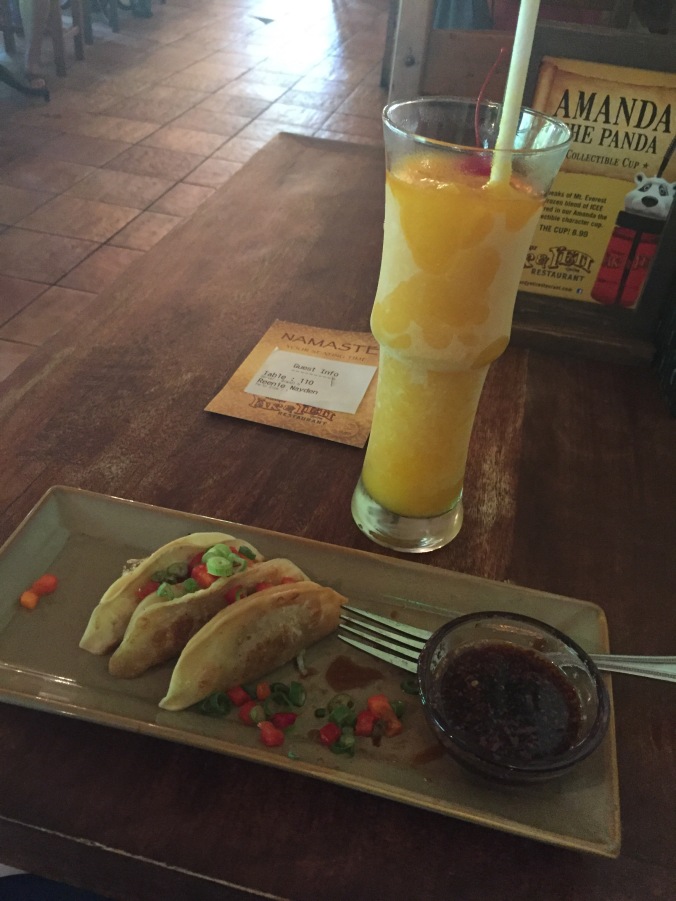 Then I saw Finding Nemo: The Musical and wept! Seriously, I was basically sobbing because I broke an important Rule Of Life which is “DO NOT DRINK AND MUSICAL THEATER,” I back tracked to Kali River Rapids and my body started to fail me. So I got back on the bus and headed back to the hotel to sit by the pool, which I wound up not doing because the AC was to nice. So I took a shower, I lay in bed, I watched some TV and drank a beer. Then I went back to Epcot for the evening.

I happened to arrive just in time to get in line and meet Mulan, and so the great “meet the princesses” quest of this trip began. That day I met Mulan and Snow White. They both asked me about my love life, which, RUDE, but also kind of hilarious. 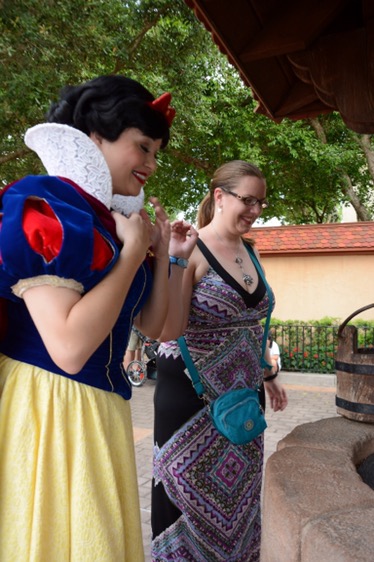 We’re wishing for my true love in the well…seriously, RUDE!

I also checked out the exhibit in Japan, which was about Kawaii Culture, and I mean, come one, the fangirl in me was not going to miss that.

I cracked up at this very straightforward explanation of cosplay

And I drank. I drank a lot. I puttered over to China and got a Peach Snap which is one of my two favorite Epcot Drinks. (The Other is The Morrocorita…which I had later…seriously, Juli and I wrote POEMS about the Morrocarita in October, it’s a margarita with Vodka instead of Tequila…it’s brilliant) and then I did the Epcot Wine Flight which I am now convinced is the best drinking deal at Disney World. You go to one of the wine stores in either Germany, Italy or France (I started in Germany) you plunk down $20 and you get two wine samples in each country. I really enjoyed some of the wines, especially the dry whites (Quelle surprise!) but the French Red was also great.

I had dinner at La Hacienda De San Angel, complete with an Avacado Margarita and a Taco Sampler (the pork in particular was WONDERFUL!).

I had made that reservation in hopes of being able to see Illuminations from the restaurant, but I didn’t have a great view from my table…so I just had an entrée and by 8:50, found myself parked at the bridge in France with that Morroccorita, ready to watch my all time favorite fireworks show.

After that, I realized just how drunk I was…and headed back to the hotel, and as I got into my pajamas I glanced out my window and noticed that I could see the fireworks at studios through the window, so I kicked back and enjoyed those.

Then I passed out…and…the next day was my favorite day of the whole trip, which I’ll get into on Friday! (or possibly next Tuesday! We’ll see…)

2 thoughts on “I’m One of THOSE people now: My Solo Disney Adventure Part 2”