Well, I’ll tell you whole didn’t win this week…that’s for sure. Those of us who wanted an answer RE: The Tower of Joy. We definitely didn’t win. (To be fair I didn’t expect an answer exactly…but the giant tease was not cool. Although, Bran being disillusioned about his father the great hero is kind of cool too, I guess…)

Also not winners, Rickon or Dany.

This week’s winner is Arya! Or, as she should properly be known these days, “A Girl” or alternately “no one.” 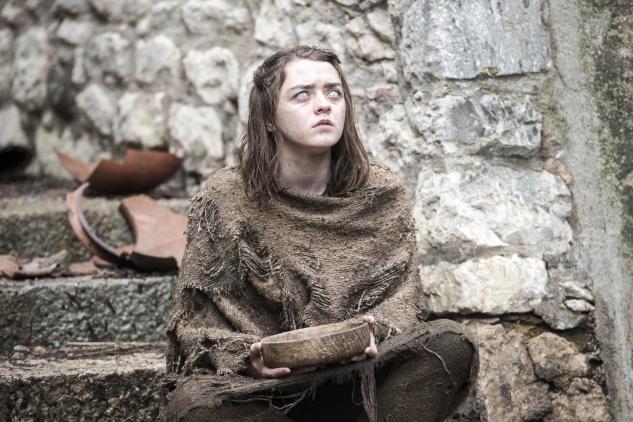 Arya got her sight back! And beat the Waif and realized just how small her list has become. But seriously, getting her eyes back is a really big deal here (although bummed we never got to see her warg into the cats, that was such a cool thing.) Anyway, she won this week.

So congrats, Arya Stark, or No One as you would clearly prefer to be called.

This week our favorite couple had to deal with Tyrion being a supremely un-them third wheel. He tries to play his reading people drinking game with them, but they don’t drink, so that doesn’t work. They’re also not chatty people, so he’s baffled by them. Missandei gets some strong moments when she comes up with a plan to stand up to The Masters. Good for her. I was just glad they were hanging out this time.

No Sansa this week. Apparently she’s a big presence next week. We shall see.

Still no. He’s alive, he’s also leaving the watch. We all probably saw that coming but as of now, definitely not dead. Like at all.

In this feature we will discuss the ways that Tommen is a precious angel child until he is inevitably killed in some horrible way. This week he had a talk with the High Sparrow about Cersei being allowed to visit Myrcella’s grave. It doesn’t quite work out but it’s a really sweet gesture.

This feature will discuss Bran’s little trips into the past. This week, he went back and saw Ned and Howland Reed fighting at The Tower of Joy, he was really upset at the whole, “stab a dude in a back” thing and we still didn’t find out what went down with Lyanna there, because the Three Eyed Raven had to go be a gigantic buzzkill and we didn’t get to see it and GOD DAMNIT WE’RE SO CLOSE!!!!

No Pyke this week, so no Kingsmoot news.