Brienne won, you guys. Brienne won the whole damn shooting match. Or sword fight, as it were. 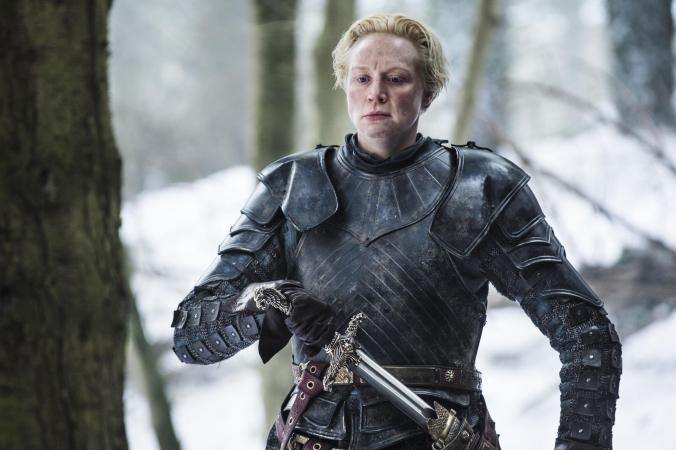 Brienne saved Sansa and Theon from Ramsay’s men. (Pod helped! Also Theon helped a little…) And then she pledged fealty  to Sansa who accepted it and the four of them are going to have an adventure and IT’S THE BEST THING EVER.

Runner up is Danerys because she was going to be raped by that Khal but then went all, “I am Khaleesi and Mother of Dragons, so bow down bitch.”  I am worried about her, and being at Vas Dorthrak, and not wanting to be there and needing to get to Mereen and then to Westeros and all. But she was great.

There was no time for shipping this week. There was only badassery, just so much of it everywhere.

Sansa is going to be Queen in The North, I bet. She was whining a lot but she was entitled with fording that river while be chased down by dogs is not great for agency. But I have a feeling that this is going to be a smack down. I mean, she now has Theon and Brienne, and Theon did some good fighting and also Pod. And hey, isn’t she also a bigamist? There’s a lot going on with Sansa right now.

Arya wasn’t terribly badass this week, with sitting around blind and not being able to fight well. I think that she’ll get there though. When is she going to warg into a cat? I hope it happens soon!

Right now, it’s looking like yeah, he is. I’m not sure how to feel about it. I still think that Melisandre is going to bring him back though. HEY, let’s talk about Melisandre, who is actually like SUPER old and her necklace is magic and keeps her young and hot and WHAT THE SHIT IS THAT????

I’m excited for the new season, I’ve waited 5 years for this answer. I can wait 9 more weeks.