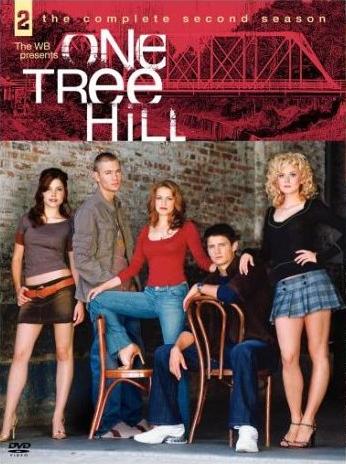 This is a real depressing episode, but it’s worth it because it reminded me that “Mix Tape” by Butch Walker is a song, which is important because I listened to that song so many times my senior year of high school that as it started in the episode I made audible squeeing noises, thus causing my office mates to look at me. I mean, how do you beat lyrics like “I’m not the same person from back in the day, in the back of the class, who you though was gay!”

Anyway, the show. Right, I’m supposed to be writing about this television show. Nathan is out of the hospital and he’s broke and about to be evicted, so the gang throws a movie night to raise him some cash. But turns out he doesn’t need it because Dan paid all his bills.

Brooke and Lucas are THIS CLOSE to getting back together. But then Brooke finds a bunch of stuff from Peyton and decides she’s not ready to have her heart broken again. UGH!

Actually, I love this episode for showing Nathan and Peyton as you know, actual humans who you can see as exes. I still maintain that they don’t really seem like a couple, even when they are, but their exchanges here really gives you a sense of history between them and it’s sort of sweet.

Season 2: Episode 22: “The Tide That Left And Never Came Back”

The gang has a writing assignment based on the George Bernard Shaw Quote: There are two tragedies in this life, to not get your hearts desire and to get it.” Thus the gang must meditate on loss.

While doing so, Brooke and Lucas drive to New York to see Haley. She’s thrilled to see them, but Lucas is still scowly and disapproving. She basically tells him that this is the deal now she’s not going back to Tree Hill and he can deal. I mean, she’s sad, but she holds her ground. Also, Brooke tells Lucas that she’s totally cool with the idea that he likes Peyton.

Lucas does not like Peyton at this point you guys, obviously, he likes Brooke. I mean, obviously!

Meanwhile, Jake found a way to get Jenny back and get out of jail. He and Peyton are real excited about it, until Nikki reveals that, dun dun dunnn, she now has Jenny and she’s leaving. So, Jake has to go find them, obviously. Peyton is really upset about it, but doesn’t regret opening up her heart to love Jake.

Seriously, wish these two had been endgame. I ship it SO HARD.

Andy has to go back to New Zealand and Dan is trying to get him deported anyway, plus he’s now jealous of Keith (came out of nowhere, that one.) Dan kisses Karen and she breaks his window for it. And I cannot keep track of this plot.

Whitey tells Nathan he should go to High Flyers and Nathan has to decide if he wants to do that or be around when Deb gets out of rehab. It’s left on a cliff hanger which he does…

Everyone is getting ready to go. Well, at least Brooke is, and Lucas tells her he loves her and she decides to walk away. It’s kind of awful, but I don’t really care, because I’m really ready for this season to be over at this point. (Season 3 greatness is about to occur)

But Peyton, meets Ellie. Which is great. Because I forgot about how awesome this storyline is. Ellie poses as a journalist interviewing Peyton about Tric. When Peyton exposes her, she says that she’s Peyton’s mother. This is, by the way true, but it’s confusing. We’ll get to it in the Season 3 premier.

Nathan decided to go to High Fliers and Deb is staying married to Dan because of reasons, I’m not really sure why. It doesn’t make a lot of sense. Anyway, then someone sets DAN on fire. I don’t know why I couldn’t remember who got set on fire. But it’s Dan. And it’s Keith that did it I think? I don’t know why I can’t remember this. Karen’s going to New Zealand to see Andy, or something. I’m sorry, I’m having trouble keeping track.

Overall Analysis Of this Arc

This is less an arc than a bunch of endings, and I’m glad, because I really forgot how weaksauce this season was.

Overall Analysis Of This Season

Not as good as Season 1, by a long stretch. Nathan and Lucas’s relationship is a bright spot, as is Anna, really, but everything else feels like warmed over stuff. The Lucas taking down Dan plot is really slow and goes nowhere, there’s nothing fun about watching Deb circle the drain. The Keith and Jules thing is another long road to nowhere, and while I love being spared the triangle, isolating Brooke, Lucas and Peyton from each other doesn’t really work for the format of the show. Neither does the complete lack of basketball.