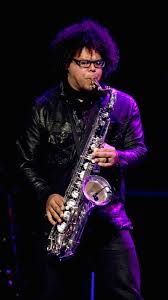 So on Wednesday night I went to see Bruce Springsteen and The E Street band for the, like tenth time, I think? I’ve seen The Boss a lot, my family goes every time he’s in the area. It’s one of our favorite things that we do. (Besides the Shore, it might be our favorite thing.)

And this year was no different. Well, actually it was a little different, because I realized that I have a big old honking crush on Jake Clemons.

If you’re not familiar with Jake, allow me to enlighten you. Jake is the nephew of original E Street member (and heart of the band really) Clarence Clemons. He took over when Clarence passed away.

This was a very difficult time for The E Street Nation. But over the past four years, we’ve grown very fond of Jake. And then on Wednesday night, I realized that I love him a little bit.

But whatever it was, it was working, is my point and I was very much enjoying myself.

So, I thought you all should know, that I have a huge crush on this man now.

Who my brother has christened “Little Man.”

I’m OK with this nickname but also, like, seriously. I love him.

(Also I realize I’ve been a little on the celeb boy crazy side lately. I think I need to go on a date.)