So, here’s the deal, I was going to wait until Monday and write up and entire post on this week’s Steven Universe “Steven Bomb,” but then yesterday’s episode “Message Received” came and I was too giddy to not just gush everywhere.

Because Peridot did it!

That little green brat actually stood up and did what was right.

OH YEAH AND YELLOW DIAMOND IS PATTI LUPONE!!!!!!!!!!!! If we don’t get a villain song by the end of this series I will be quite disappointed.

This Steven Bomb has been pretty amazing, (“Steven’s Birthday” was totally heartwarming and the animation in “The Answer” was absurdly gorgeous and “It Could Have Been Great” gave Peridot a singing moment, which, swoon!) but now one of my favorite cartoons ever has been been graced by the glory that is La LuPone. 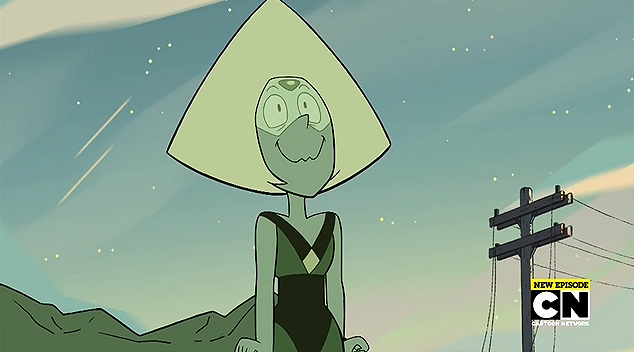 We don’t know a lot about Yellow Diamond but I imagine that she’s got the cool detachment of Evita combined with the drive of Mama Rose and the pure white hot crazy of Norma Desmond & Mrs. Lovett. Combined of course with Reno Sweeney’s comic timing and sex appeal.

(If you’ve been around for a while, you probably remember that I am a big, big fan of Patti Lupone.)

But more about Peridot’s awesome redpemptive arc. Peridot showed up exactly a year ago (thanks internet!) as a mysterious holigram, and like everything in Steven Universe turned out to be something totally different than she seemed. She’s really just a big old dork, who wants to go home.

I’ve grown unbearably fond of this character, (although she’ll never replace Pearl in my heart as favorite.) mostly because she’s just such a loveable dork it’s hard not to adore her, like Zuko before her, we were all just waiting for Peridot to join the Crystal Gems properly, and by refusing to allow earth to be destroyed and standing up to her commander, she has.

But it was also some of the best character work so far on a show that has had nothing but stellar character work for ages. It isn’t just the cruelty of allowing the gem cluster to explode that’s breaking Peridot’s faith it’s that Yellow Diamond, who she considered the paragon of reason is allowing emotion, and a petty emotion like spite to lead her actions. Peridot could never follow such a leader.

And so she trots out her favorite insult and calls her leader “A Clod.” (A term previously hurled at Steven and all of the other gems in excess.)

Instead now she’s a Crystal Gem, to quote Garnet, “Whether she likes it or not.” It’s pretty amazing. The big question now is that will happen to the opening credits. Will Peridot be in them in some way now?

I love the little green Dorito!