Loved it again and seeing it with a Saturday crowd that actually included kids was fun. But that’s not what this post is about.

This post is about the new love of my fangirl life.

This is about Oscar Isaacs.

I have forgotten each and every Chris.

There is only Oscar Isaacs.

Specifically there is only Poe Dameron. 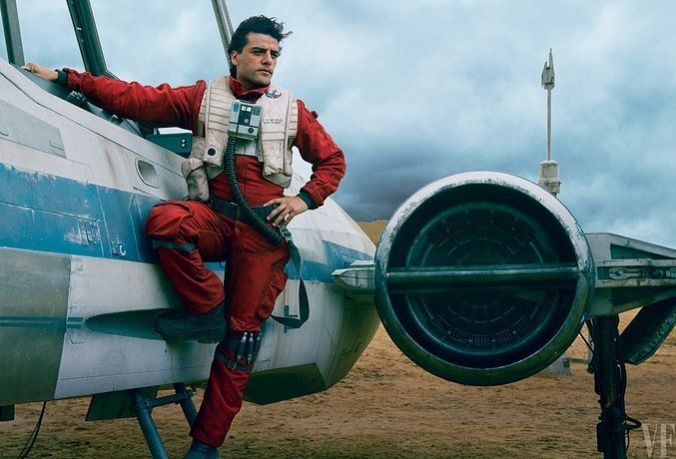 This is the sexiest picture ever!

Oscar Isaacs is adorable, which I knew. But I really want to talk about Poe. One of the things after talking about The Force Awakens with everyone I know, that I decided I liked about it is how the new three are very different types than the original three.

Namely, I kept waiting for Poe to be kind of a dick, because he’s a badass fighter pilot (the best in the resistance) and those kinds of guys are pretty much always dicks in movies. (Specifically, Han Solo is kind of a hug dick in A New Hope.) But Poe, just isn’t. He’s a nice dude, who wants to bring freedom to the galaxy, and I cannot stress this enough…is incredibly incredibly sexy.

Like, I really can’t stress enough how hot he is.

I was explaining it to a few friends this weekend by saying, “remember what I was like after I saw Thor? It’s like that.” I didn’t have this blog back then. (I had my old blog…it was not as good as this one.)  But I spent a lot of time looking at pictures of Chris Hemsworth and sighing dreamily.

I’ve been doing a lot of that.

I should note, I’ve been kind of resetting my nerd brain…I still have a few weeks of Gotham and Supergirl to watch, but I’m just not quite feeling up to it. I will.

I’m also working on some cosplay stuff for Heroes and Villains Fanfest. (including Poe…probably…I’m going back and forth on it…the only other dude I’ve ever cosplayed was Cap, and that’s different because I wear a dress…there’s a whole girly girl identity thing here that I need to parse out…you don’t care…) and I’m switching up scheduling this week, so as not to report on Sailor Moon on Christmas eve, anyway, you’ll see!

Just letting you know that the tone may change around her in the coming weeks!