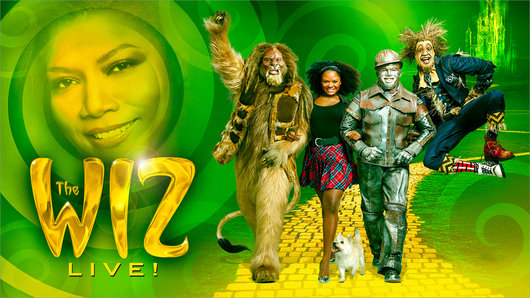 Last night my mom, my brother and I settled on the couch to take part in the now annual holiday ritual of theater geeks across the nation collectively holding their breath known as the NBC Live Musical.

This year the peacock headed off to Oz to take on The Wiz, and being that it’s the first time they’ve done a show that I didn’t know inside out and upside down, I was excited to watch. (I have seen the movie a time or two, but not in years, if nothing else this has made me want to revisit it.) After the horrible trainwreck of The Sound of Music and the (IMO) charming but uneven Peter Pan, it was interesting to see NBC broaden their horizons with The Wiz and I was wondering if it would work at all.

It did. And spectacularly. The show was, first of all, beautiful to look at. The sets and costumes were creative and fun and created a new Oz. The Wiz itself is a really charming and pleasing piece of theater and the music is beautiful.

But as with the others, so much came down to the cast, which, this year was nearly pitch perfect. Queen Latifah as The Wiz was probably the low point (which just shows how great everyone else was, because she was pretty impeccable.) Elijah Kelly had the largest shadow to escape, since The Scarecrow is in most people’s heads, you know, Michael Jackson, and he acquitted himself quite well. David Allen Grier’s lion was a deep and wonderful reminder of how talented that man is. Uzo Adubo and Amber Riley were delightful as our good witches and Mary J. Blige seemed to be having the time of her life (if struggling a bit in her costume.) as Eviline. And having Stephanie Mills as Aunt Em was touching and very sweet.

And HOLY CRAP Ne-Yo, as The Tin Man. Did you watch it? Get on You Tube and watch his songs! Did you know that Ne-Yo could do that? I didn’t! Last year I gave Kelly O’Hara my, “Audra McDonald Award For Perfection In An NBC Live Musical.” This year Ne-Yo gets it. My God is he wonderful. Just awesome. Someone get that man on Broadway. Hell, people need to leave the cast of Hamilton eventually right?

But the whole production was going to rise and fall on the shoulders of a 19 year old newbie from Rahway (JERSEY WHAT!). Shanice Williams did not disappoint, in the slightest. In fact she was wonderful. She radiated light and joy and it fit Dorothy perfectly. When she launched into “Ease On Down The Road” she looked like she was trying not to just giggle with glee that she was there. And “Home” is a hard song to sing, but when you deliver it, it’s also a hard one not to bring tears. Shanice delivered.

This girl is going to be a star and it was amazing to see her here.

Overall I was hugely impressed, and unlike it’s predecessors, I’m looking forward to watching again when I get the chance. (But first the original movie…maybe tomorrow night.) We’ll see what happens when Fox jumps in the live musical game with Grease in January, but I don’t see it being as good as this. (Mostly because Grease is not as good as The Wiz…regardless of version.) And excited that hopefully this allows NBC to go off the beaten path going forward with choices.

Not that I would mind seeing The Music Man or something like that.