So, we’re entering that stage of Game of Thrones where nobody wins because everything is terrible.

But there is someone who sort of wins in this episode, and it’s someone we never met before. 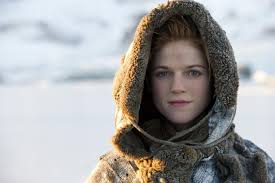 While she has yet to remind Jon that he knows nothing, she does manage to get her whole “kissed by fire” thing going and thus spoon with him, and prevent him from chopping off her head.

I really love Ygritte, and she’s a figure of some controversy in our house because my sister really, really hates her but most specifically she hates Rose Leslie’s accent. But I really like her and I specifically love Leslie and Kit Harrington’s chemistry, so I’m glad she’s on the scene and that Jon didn’t cut off her head.

Runner up goes to Tyrion, who slaps Joffrey around a little bit, which we’re all always glad to see him do.

When the peasants attack everyone coming back from seeing Myrcella off to Dorne, Sansa almost gets raped and murdered. This is by far the worst thing to happen to Sansa so far, but not the worst thing that will happen to her. She does slap the guy and then get rescued by The Hound, which is nice. She’s also nice to Tommen, when he’s sad about his sister leaving, saying that Rickon cried when she left. D’awww. Oh, and she realizes that she can trust Shae. Sansa, marshalling allies.

Arya names her second name, this time to save her own skin, as she’s pretty sure that the guy is going to rat her out to Tywin. It still bugs me that stupid Little Finger doesn’t grab her and take her back to Cat or The Eyrie or whatever at this point, because I hate Little Finger, he is the absolute worst. Anyway, more Jaquen and Arya stuff to come, and I’m going to miss it all so much when it’s gone.

Who Was Jamie a Dick To?

No Jamie. But Tywin does tell Arya that Jamie is dyslexic, which is a detail I had forgotten about and I like a lot.

Robb Is A King and Kind Of Bad At It

Robb flirts with Talisa. Bad. Robb finds out that Theon took over Winterfell, because he made the terrible decision of trusting Theon. Robb then trusts Roose Bolton to take Winterfell back, or to trust his Bastard to do it.

Not me. Obviously. No one is ever excited to meet Ramsey.

In A Totally Unrelated Story:

I fly off to Disney World Tonight!! Watch my Facebook for pics, random though updates and general joy. I’m unbelievably excited, but a little bummed out about not being at NYCC! Have a good Con, those who’ll be there.