You want to know what’s going to get Khaleesi her win? It’s finally getting something done for once. So, that’s why she gets the win. 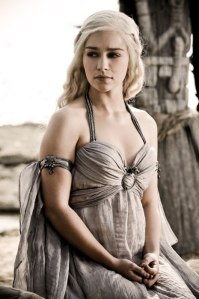 Dany sends her blood riders out to find water or cities. She gets one of their heads back, which…isn’t great, but does mean that some sort of civilization is nearby and it is a world of a lot better than the whole Moses in the desert thing that they had going on before, still, dead bloodriders, not great, so this is a win, but a qualified one.

Runner up goes to Yasha Greyjoy, because we learn what a bad ass she is. But getting felt up by your brother is not ever winning. I feel like this is something that she and Dany could bond over, idiotic brothers who once felt your boobs a whole bunch.

When sending the riders out, Dany reminds them that they’re “Blood of my blood,” which is a bond I will later hold that Grey Worm and Missandei are Blood of her blood. But they don’t die…yet…

Sansa is not in this episode. Thus, no agency, but also no subjegation. So, win? I guess?

Arya meets Ja’quen! OMG! He’s all mysterious and great, and she’s immediately drawn to him. So excited to watch all of that stuff again, really and truly. She also confides her true identity to Gendry, and guys, I like really super miss Gendry.

Who Was Jamie A Dick To This Week?

No Jamie this week, but Cersei and Tyrion sure talked about him a lot. And so did everyone else.

Robb is A King And Kind of Bad At It

No Robb this week, but the Theon stuff is very tied into how shitty Robb is at Kinging. Sending Theon back to the Iron Islands is possibly the worst decision Robb makes besides marrying for love instead of one of Walder Frey’s daughters. But it’s just cringingly bad, and everyone tells him so.