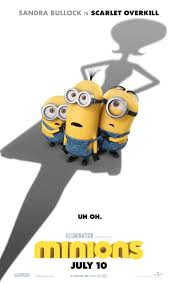 Minions was not initially on the docket for Movie Season. Really. Two years ago when movie season was “activities for when I’m off on weekdays and everyone else is at work,” then it would have been a no brainer.

But when I have limited time, money and bandwith, It was a soft pass. I’d like to check it out, but I’m not going out of my way. But then, Chrissy, Glen and I were out to dinner on Saturday, not quite ready to call it a night, and decided to catch a movie.

They are (like most of my friends) not as up to date as I am, and I made it abundantly clear, that if they wanted to see something, I would go again. (Also that I would absolutely go see Inside Out or Jurassic World again, and enthusiastically.) But it worked out that we went to Minions.

What’s fun about Minions is that it’s a very old school cartoon, with fun moments, over the top silly violence and protagonists who you can’t help but root for. The three minions who we follow, Kevin, Stuart and Bob are a good deal of fun and the transition of the team serving Scarlet Overkill and her hip husband Herb (voiced delightfully by Sandra Bullock and Jon Hamm) to serving Gru is handled with a lot of cartoon logic fun.

In the end Minions can’t stand up next to Despicable Me or even Despicable Me 2, since it doesn’t have the heart of those two movies. But it’s serviceable for a few giggles and a lot of 1960’s kitsch.

Also, Bob is my new favorite. He has a Teddy Bear, and is just a big yellow ball of enthusiasm, who you instantly want to protect. So that’s good.

Shaun The Sheep again. Chrissy seems really excited for this one. It falls squarely in the “not my thing” camp, but I wish people well with it.

The Secret Life of Pets: HOLY CRAP is this trailer funny. Whether the movie is will be another ball of wax, but it’s a very good trailer.

Goosebumps: Having been banned from reading those books as a child due to their nightmare fodder, I don’t have the emotional connection here. But it looks like a delightful family action comedy and stars Logan Lerman and Jack Black. Those are two dudes I would watch do just about anything.