Hey all! We’re into Zombie KP land. But unlike many other zombie shows, it came back pretty strong, albeit with a new status quo and some intensely cool visuals. 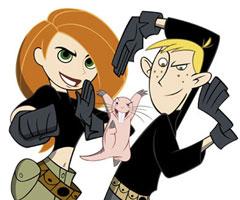 Ron has been having dreams where his and Kim’s kiss ends with her disolving into a syntho drone. But it turns out that they are actually dating. Back at school for senior year, Kim, Ron and Monique get psyched for the year ahead, only to have Bonnie show up and take the wind out of their sails by reminding Kim that Ron is an unsuitable boyfriend.

Ron gets this under his skin and decides that he’s going to take Kim’s battle suit (which they’ve been using to hand Dr. Dementor’s ass to him.) and try out for the football team. He makes quarter back and Kim is psyched but wary. When she realizes what’s happening she’s not happy.

When Ron tries to play on his own, it simply turns out he’s much more suited to be a runningback than a quarterback.

I give that a major duh.

Also they beat Dementor, and then decide to not use the battle suit anymore.

Mostly because it exploded.

Drakken is waiting for someone to break him out of prison, but instead Senor Senior Junior breaks Shego out, wanting to give his father the best birthday present ever by pulling off the perfect heist.

They try a few things, which Kim and Ron foil them from, finally landing on kidnapping the five richest people in the whole world, who just happen to be Senior’s poker buddies.

Meanwhile, Kim and Ron are having money troubles of their own, Ron keeps paying for their dates with coupons, so they both get jobs. In the end, Ron winds up working for Smarty Mart and Kim for Club Banana. It’s pretty great.