So I know I promised not to harp too hard on Man of Steel 2, until more details actually come out, or we at least have a trailer. But I’ve decided that I’m going to give myself a pass once a month to blog about it.

That’s it, just once a month.

So, if another time in September I start writing about Ben Affleck, or how now Bryan Cranston probably isn’t Lex Luthor. (Ah, the internet, where one guys “Wouldn’t it be cool if…” becomes fact.!) you can all stop reading, or shame me, or whatever it is you do personally when I blogger breaks her promises?

Anyway, as I sat reading Batman and Robin: Reborn this morning,(I’m completely addicted, by the way, to the times when Dick was Batman, the end of Knightfall, this Batman and Robin series, ugh, it’s all so good.) 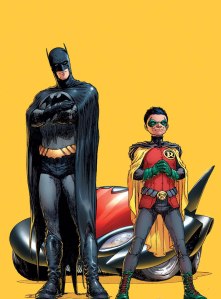 I love how they’re both smirking, all the time. I once said that “Sarcasm wasn’t an effective crime fighting tool.” I just hadn’t seen it done right yet.

and I realized the best part of them bringing Batman into the new larger DC Film Universe, (DCFU? It’s kind of a funny acronym.) through Man of Steel 2: Man of Steelier, is that we don’t have to do his origin story again.

Don’t get me wrong, I love origin stories. I think they’re the best part of superheroes, seeing why someone wants to put on tights and save people is fascinating. It’s one of the reasons that I will always, always, always defend Smallville.

But we don’t need to see another take on Batman’s origin story. We all know how it goes. Bruce Wayne is eight years old, he and his parents are walking down the street, they get pulled into an alley and mugged. The mugger shoots his parents. He never gets over it. He travels the world and learns how to fight a lot. He becomes Batman. Bad ass (Bat-ass?) crime fighting ensues.

Thanks to Christopher Nolan, most people even know about characters that were previously sidelined in Batman movies before, Lucius Fox, R’as Al Ghoul, Bane, Talia, Selina Kyle’s little buddy (who has many names, but she’s always there.) The Scarecrow. People know who theses folks are now.

So we don’t need to see eight year old Bruce Wayne walking down the street with his parents and them getting killed again. We really don’t. We’ve seen it in two Batman movies. Three if you count Mask of The Phantasm. 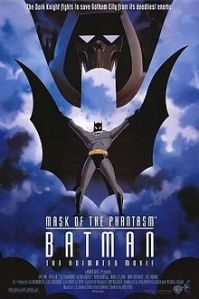 You should count Mask of The Phantasm , because it’s amazing!

So having Batman just show up in Superman’s movie, fully formed, without having to go into all of the tortured, weird fear of bats stuff is going to be great.

We get to skip to the good part.

Well, the other good part.

I mean, it’s Batman, so to me they’re pretty much all the good part.

OK, this is the bad part. But just this.

2 thoughts on “The Caped Crusader is Coming, and We Know How This Goes”