Does anyone remember that song “The Geeks Get The Girls?” It was on the radio for like a mili-second sometime when I was in high school. I don’t know. It was kind of dumb, but I think that Josh Schwartz took it as a mandate.

I say this because a few years later we got Seth Cohen. 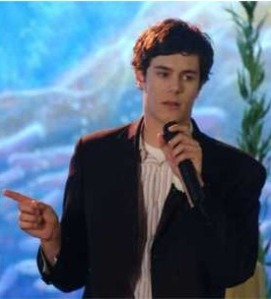 We miss you buddy!

Anyway, ever since then it’s become like it’s own genre, where dorky guys wind up with hot cool women.

And there’s never been much of a reversal on that. I mean, there aren’t a whole lot of movies or TV shows where dorky girls hook up with cool hot guys.

There’s Pretty in Pink, and arguably She’s All That, but She’s All That forces main character Laney to become a cool hot girl. Then came Ugly Betty, but Betty was still always with dorky guys. (Even though they were totally adorable.) 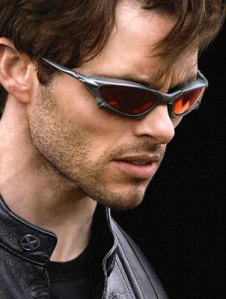 First of all it’s nice to see James Marsden get a girl. With the exception of 27 Dresses, James does not have luck with the ladies. He continually loses them to the more higher profile leading men like Patrick Dempsey, Ryan Gosling, Superman, and an off camera death because of that time he lost his girlfriend to Superman. (To say that Jean Grey chose Wolverine over Cyclops would be inaccurate. She exploded Cyclops and then Wolverine couldn’t be exploded because of his healing powers. Also, #25daysmore!) 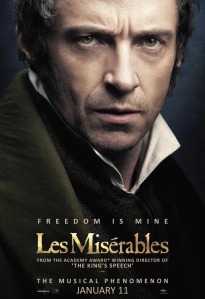 Any, even roundabout mention of Hugh Jackman brings this up now!

Anyway, last night on 30 Rock, Liz and Criss got married. Liz wore a Princess Leia costume (the only white dress she owned), and basically, Tina Fey struck a blow for dorky girls everywhere. 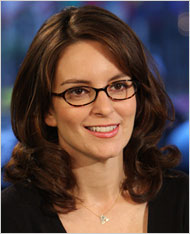 I have wanted to be you since I was 12. Not in a creepy way!

Thanks Liz! And Thanks Tina. You are the Josh Scwartz of girly-ness and we love you.

Growing up in the 90’s there were a lot of things you could count on. Unlike now, it was a pretty steady time. For example you knew that Will Smith would always be able to save you should aliens invade. 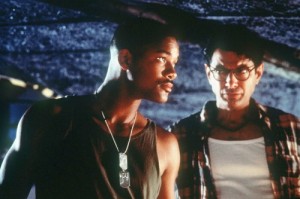 Also Jeff Goldblum would do science!

You knew that Barney was a dinosaur (not a suit wearing playboy), you could always change your final answer, and that every Friday, come hell or high water, Corey Matthews was going to Learn Something.

Boy Meets World was a benchmark of childhood in the 90s. Corey, Topanga, Shawn, Eric, Mr. Feeny and then later Jack, Angela and Rachel were known to everyone. Not to mention the more minor in and out characters, like Minkus, Mr. Turner, Joey The Rat, Frankie the Enforcer, Harley Kiner, Griff Hawkins, Jason and I could keep going on. We learned all kinds of things from these guys. Like, that time Eric had an Asian girlfriend, and Corey learned that racism was a thing. OR when Shawn’s parents abandoned him, and we all learned that agnst was a thing. Or when Shawn joined that cult and Mr. Turner got in to a motorcycle accident and we learned that clumsily writing a character out of a show with no real closure was a thing. The point is, we learned a lot over the years. 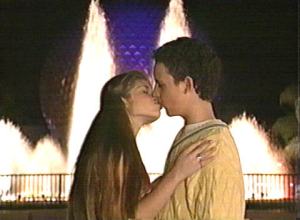 We also learned that stalking your exgirlfriend to Disney World was a great idea…not all of the lessons were winners, but this remains one of my all time favorite episodes of anything

And now a new generation will hopefully learn just as much. It’s been announced that Disney Channel has commissioned a pilot called Girl Meets World, featuring Corey and Topanga’s daughter Riley and son Elliot. Presumably Riley will be a wide eyed naive kind of clumsy girl and Elliot will be a lovable moron. Danielle Fishel and Ben Savage have both singed on and seem enthusiastic about the project.

When this was all announced a few weeks ago, I read one article that point towards using Degrassi as a model for the show. Meaning shift the focus to the new younger characters, but keep the spirit and tone of the old show. Basically don’t 90210 it.

I am interested to see the Boy Meets World touch on certain current issues. I hope that even though Girl Meets World slated for Disney Channel, it gets the grown up touches that made the original great. Issues like cyber bullying, the rash of teen gay suicides, and the down turned economy would have been beautifully handled on Boy Meets World, with heart and humor. I know being on kid friendly Disney, not then top rated ABC, will change the tone a little, but I’m hoping Girl Meets World will be a little bit more Lizzie McGuire and a little less Hannah Montana.

And if we all get to sneak a peak at Shawn Hunter again? So much the better my friends! (Also Eric…I ❤ Will Friedle. I may have mentioned that once, or twice.)

I’ve decided I’m officially shipping Emma/Hook for Once Upon A Time. Ever since the Giant episode (wasn’t that awesome?) I’ve been totally obsessed with the two of them getting together. Yes, maybe Henry’s father and possibly August may get in the way. Not to mention the whole pirate, ran away with Rumplestilskin’s wife thing, but goddamn do they look good together!

Guys! I haven’t gotten so excited about a shipping a couple since Ari/Eric. 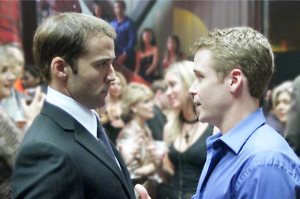 There is so much love between them.

While one of the things that I loved about season 1 of Once was that the focus was on the familial love between Emma and Henry, this season seems to be the Regina and Henry show (which is awesome), and also, while Graham was great (RIP!), and there were some sparks with August, the chemistry between Hook and Emma is so freaking awesome. 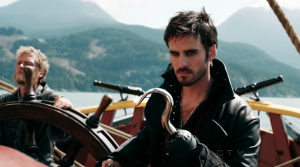 Also, he looks like this. There is almost as much man candy on Once as in The Avengers

The story Once has given Hook is amazing, if a departure from tradition. (Nothing new for this show). He’s kind of the Edward Cullen of Captain Hooks, but we can forgive him for it. Once just a normal pirate named Cillian, he and Mila ran away from Rumplestilskin, and years later (once Rumple became The Dark One,) the two got in to a duel, Rumple killed Mila, and he ran away to Neverland.

Of course, this week changed a few things, but I still want this to happen. They can be like Buffy and Spike!

Hey everyone! So, as predicted, the storm knocked out my power internet and will to do anything but lay around.

Also with National Novel Writing month going, even though I was in a hotel with internet and television, I was trying to get a head start there (I’m about 600 words behind.) Hence to posting.

Also I’ve been rereading the Pink Carnation series, which is something I’ve wanted to write an epic and awesome post about for a while. (My love of The Pink Carnation series is like one of the fangirliest things about me.) So, when I get through those, (I’m on The Deception of The Emerald Ring!) you’ll be getting some good stuff. Also my birthday party was delayed a week, and that will bring about all kinds of fun. (I assure you.)

So, I’m safe, and fine, no worries there, just having some motivational difficulties.

Alternate Title: What the Disney Buy Out of Lucasfilm Means To My Dumbass Friends

So I’m still without power at my house, but we checked in to a hotel. It’s a huge pain, but we’re all safe, and our house is fine, so we’re counting our blessings.

Last night I hit a bar with some of my oldest friends. It was great, but when my friends started talking about the Disney Buy Out of Lucasfilm that was announced on Tuesday, and because we were in a bar and we had been drinking mind erasers, the conversation got a little loud and incomprehensible.

My friend Adam was dressed as Han Solo though, so that gave us some special insights.

The guys did seem very excited about the prospect of a seventh Star Wars movie, which surprised me because, well, these are fanboys.

But of course, I began to get indignant when they were talking about how excited they were for the prospect of Star Wars at Disney World, in combination with Disney’s ownership of Marvel Comics. I believe it went something like this.

Friend Mike: There will be Star Wars characters at Disney World now.
Friend Adam: Yeah! Oh and they can combine it with Marvel, it’ll be great.
Me: Actually, um, there’s already Star Wars at Disney World at MGM Studios (I will never call it Disney Hollywood Studios), and when Disney bought Marvel, Universal retained the theme park rights, because Marvel Superhero Island is already a thing.
Friend Scott: Only for four more years. That’ll change.
Me: Probably not, and I doubt they’ll build more Star Wars stuff since they just redid Star Tours like two years ago.

We went around in circles for a while (due to the vodka) and I realized I wasn’t going to win so I went to talk to other people.

Here’s the thing, since I was two years old, I’ve been to Orlando, Florida for theme park vacations at least eight times. I’ve been to Walt Disney World and Universal Orlando a bunch of times. I love Orlando. I would go there every year if I could afford it. I understand the delicate balance that exists between Universal Orlando and Disney World. This balance is hugely upset by the fact that you can walk around Universal with a beer and it’s like seven times cheaper.

Because the two resorts are in constant competition, I seriously doubt Universal is going to let the theme park rights to Marvel go. Also one of the things that I think they’re pushing for, with the construction of The Wizarding World of Harry Potter, is to become the ultimate fanboy and girl vacation destination.

Besides San Diego in August.

Anyway, the point is, my friends know a lot about Star Wars. They probably don’t know as much about Orlando as I do. As far as the theme parks go, the acquisition of Lucasfilm probably just means that we’ll finally get the Indiana Jones ride that’s been huge at Disney Land in Disney World, because the rights issues will be easier. And maybe there will be a few more Star Wars weekends.